It was hot and humid around noon. I don't feel hungry in such a sweltering hot day.
The wise would eat less and healthier food for lunch.

I recommend to eat zaru soba, buckweet noodle served on a
bamboo draining basket with dipping and tempura.
My favorite soba restraurant was very busy but I could find the seat after ten minutes' wating.

Though I was not so hugry, I ate up all of the dish soon.
Cold noodle and hot tempura might stimulate my appetite.
It made me satisfied.
It was blessing!

There used to be the swans' nest during winter at the river side of Kuji city in Iwate prefecture before the big earthquake on March 11.
The swan had come to the area with its flock in 2005 but he was left alone after the flock had gone because having injured and lacked left wing. He couldn't fly anymore.
People living near the area started to take care of him, named 'Solo' and fed.
But the disaster damaged the area, 6 people were still missing and dead and 800 houses were destroyed.
And the disabled swan was missing. People were worried about Solo and searched around him but it was in vain.

On 17 in April, the swan was finally found at the sandbank in the river.
He seemed weak and thin at that time.
Now that he is their great hope of symbol to revive.
Solo makes people happy and encourages so much.

I'm sorry to tell the fact that the white angel has gone in the evening which I had found this morning. It showed a beautiful display for two days since yesterday.
It is said;
The life of flower is short,
So much pain in it
But it's still blowing and thunder storm above the clouds.

It's obvious flower as a metaphor for women's life.
That's why we should not waste time so as not to miss life time.
Nature teaches us a lot. 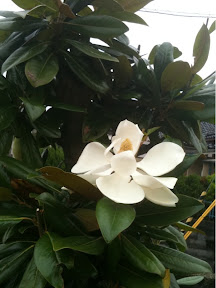 It's good to see a lovely white angel in my garden.
I'm so excited to catch her view in my iPhone but it stands so high that I have to climb ladder.
I wish I were 2Ms tall so as to see its beatiful view in my eyes. 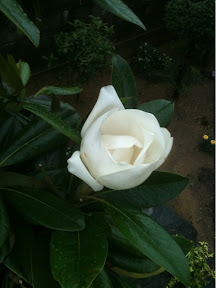 Quiz:
What do you think of this flower?
I'd like to have your guess.

It rains cats and dogs.

It seems cats were believed to cause much rain and while dogs did storm in ancient days.

Anyway I'm worried about heavy rain might damage baby flowers.
I find some part of flower garden are water pool and got muddy \(//∇//)\
I need to drain the water.
I've never had such a downpour recently.
According to the weather forecast ,rainy season will long more after weeks.
I can appreciate moderate shower of rain but no more so much.

I've found a swallow's nest on my way back home in the country road. When I stopped at the signal light, an adult swarrow came into the nest under the roof to feed babies and flew away at once.
I stood under the roof to take a picture. But it was not a good place for me to take the photo of them because the sunlight was against me and too dangerous to keep standing on the intersection.
I had to try to push the shutter only twice and hurried back into the car.
I was very glad to see the happy family and wish their safe departure soon. 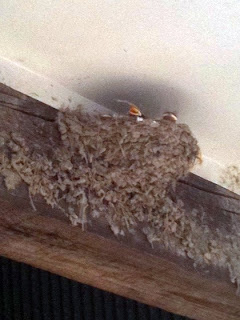 It's summer solstice today!
The day time is the longest in a year. The temperature was the highest this year and in the rainy season, badly humid and wet in the afternoon. I have to admit it's the typical rainy season just before the midsummer.

By the way I found sprouts of Sunflower which I seeded a week ago.
I'm looking foreward to seeing the summer dressed flowers so much.

I've got a vase of wild flower arrangement.
They are seen on the side of the country roads.
One is called Nobiru, a kind of leaks whose leaves are edible.
The other is Dokudami, a kind of herbs which is used for medicine.
They are really lovely and natural because they are not protected but live strongly and patiently all their lives in the nature.
We sometimes learn from the wild plants which never give up and find their place to live.
It makes me heal from the complicated life. I will smile at the tiny flowers at their most.
Thank you for the great life and remind me of the beauty of the nature. 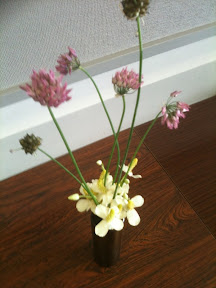 It was declared that rainy season has just come lately.
It seems delayed compared to the usual year.
I finally come to see the flowers of hydrangia.
I've arranged some of them and enjoyed some more later. 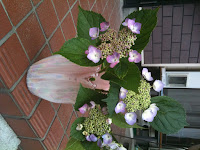 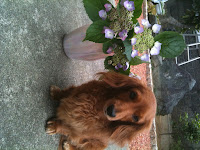 I've been listening to the Little Charo2 on the radio since last year. It is now rebroadcasting on the TV,streaming on the radio and online as well.
It's not good time to catch up the TV program, so I follow the radio programs.
This time I can listen to the story easily because I've already known the contents, so as not so impressed but taking a good caution about the characters and the expressions precisely in the story.
This time I take a notice of Ruby's expression.

"We go through a lot of painful goodbyes."

She said to goodbye to Shiny who offered to stay with her and quit the leader of the flock. But she declined his proposal, instead she wanted to see him flying bravely as a leader until the last moment in her sight.
I think her love is strong enough to kill selfishness and show respect for his life wishing him to be happy.it's really a true love, isn't it?

By the way, I convince that the voice of Ruby's and Kanon's are the same person. I really love both of the characters.
Does anyone notice it?

It was warm and mild in the afternoon.
A little breeze blew humidity away and made the air clean and refreshed.
I suggested my parents staying almost indoor to bathe the sun outdoor.
I made them open air cafe in the garden. It seems like a picture of an old couple being happy and peaceful in the afternoon of their life. 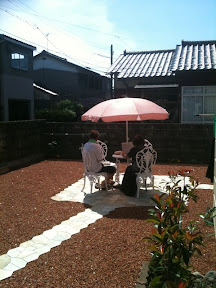 I'm so excited to do it myself by low cost but time and labor are consumed. I'm sure that it makes me clever and skillful.
Then I found the next target to fix by DIY.
It was the problem with the door of system kitchen.Some doors were broken in the hinge joint.
It was not until then that I could repair the joint. Though I had ever required someone if they could support me with the problems, just being advised to purchase a new one for hundreds thousand yen. So I had almost given up solving the problem.
It's time for me to start DIY!
I went to home center and bought hinges for the door and finally fixed.
I've never imagined such cool works by myself.
I'm very proud of my tasks and the result.
I will find other DIY and enjoy myself so far.

I was asked to fix the cock of the water in the bath room because it was old and tight to hundle by an old lady who lives alone in the apartment.
I could ask the professional mechanic but it would cost her much. So I similated the lowest cost solution and then I should make effort to save money for her.
She is 91 years old living alone and almost independent for more than 10years after the husband death.
She used to be my neighbor and my father was a good friend of the wife and husband.
I've also known her for 30years.
I want her to live easily and happily just seems like my grandmother.
I helped her to change the cocks from the old ones to new easy ones. She can only turn the lever by single hand, which I bought at the home center, Do It by Yourself shop.
I was happy when the old lady looked relieved and smiling.
I found myself being saved by hearing the gratitude or having the good deed to someone else not for myself.
I know human being share thanks giving and the brave heart.

It was announced that Apple will release a new cloud service this fall.
It's called " iCloud ". Data, music, schedule, photos are once in the cloud, they are automatically shared in the PC or other devices for free.
They say MobileMe which is the present cloud service ¥9,800 yearly fee will be closed next year.
Actually I updated membership and paid it last month.
I need to learn more about iCloud and shift to the new cloud until the expiration of MobileMe.

It's got sunshine in the morning. The power of the sun light is very strong.
I couldn't stay long outside in the cafeteria because of the strong beam of the sun.
I wish I could save the energy in my body and charge the buttery to transmit to my iPhone.
Now that we are expecting the safe and steady energy source, so the solar power is the one we hopefully rely on.
Anyway we need to change our mind from spending, wasting life to saving, ecological life.

Marie often needs to be alone at home recently because we've got busy for some reason.
We can't take her with us so she has to keep home by herself.
I feel very sorry for her left alone.
That's why I give her a favorite snack which looks like a bone.
She bites and enjoys for a long time.

jen
I like simple and humble life. It's more important for me fortune in my heart than gold or diamond.